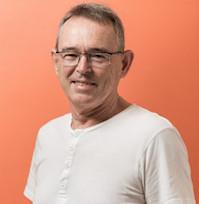 Richard is an architect by training, worked for over ten years for the eThekwini Municipality as a project leader, first of the Warwick Junction Urban Renewal Project and then for the inner city renewal programme. He left the city in 2006 to establish Asiye eTafuleni and focus on offering design and facilitation services to those working in the informal economy. His professional technical, design and project work has been recognized through various local, national and international awards and citations – namely, as recipient of the 2014 Diakonia Human Rights Award for advancing the rights of informal workers.

AeT believes that informal workers and the working poor must have a voice in urban planning and design processes. AeT works to provide a facilitating role – as well as an active role – in promoting informal workers voices in urban design and planning.
•    Spatial Planning
•    Infrastructure and Urban Furniture
•    Regulations, Laws and Policies